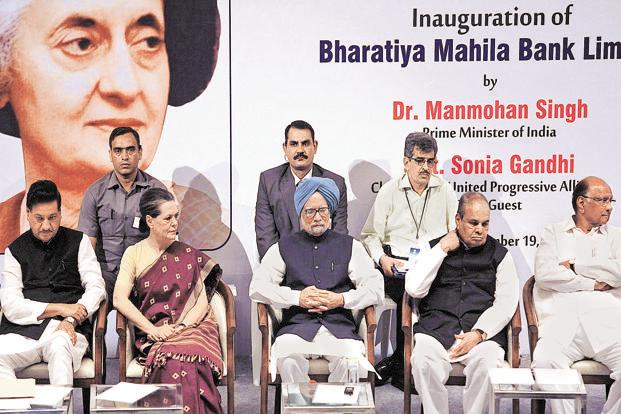 The scene is similar to many of 40-odd branches of the one-year-old bank across Indian cities. Barring Jammu and Kashmir and some north-eastern states, the lender has opened branches in all states, but its business is yet to take off. There aren’t too many people who know about this bank meant for women.

Bharatiya Mahila Bank is also finding it difficult to expand its branch network as landlords are not too excited about offering premises to it till they are told that it is wholly owned by the government of India.

It is the only public sector bank in the country entirely owned by the government, and is probably the last company to be incorporated under the old companies law of 1956. At its launch in Mumbai on 19 November last year—the 96th birth anniversary of former prime minister Indira Gandhi—former finance minister P. Chidambaram had said the bank would break even in the next three-five years. Its total business—advances and deposits—would be Rs.60,000 crore by 2020, when it would have a 770-strong branch network and would be listed in the stock exchanges in due course. Former prime minister Manmohan Singh and United Progressive Alliance (UPA) chairperson Sonia Gandhi graced the occasion.

Chidambaram was guided by an Excel sheet prepared by SBI Capital Markets Ltd, the investment banking arm of State Bank of India (SBI), which drew the blueprint for this bank. A committee consisting of former Canara Bank chairman M.V.N. Rao, former Bank of Baroda chairman M.D. Mallya and SBI chairperson Arundhati Bhattacharya, among others, gave its inputs for setting up the bank.

A year down the line, this bank has gone nowhere. It has a deposit base of around Rs.520 crore, advances of around Rs.275 crore and 75,000 customers, out of which 82% are women. About 60% of its 250 employees are women. In 2013-14, it had made a profit of close to Rs.13 crore, primarily on treasury operations. Its Rs.1,000 crore capital is entirely invested in government securities. In the first half of the year of the current financial year, its profit is around Rs.26 crore, again based on treasury income.

With a minuscule branch network and no brand push (it advertises on the baggage tag of Jet Airways), the challenge for the bank is business growth. While men also can keep money with it, when it comes to loans, it is exclusively focusing on women. Apart from women customers, any company headed by a woman chief executive officer (CEO) can borrow from this bank. Similarly, companies where 40% of the board of directors are women or 50% of employees are women can be its customers. Similarly, a male entrepreneur running businesses for women such as a nursing college or an engineering college for women or producing hygiene products for women is also eligible to become a borrower.

The bank is also developing exclusive loan products for running crèches, kindergarten schools, home-catering services and beauty salons, which are typically run by women. Since in most states in India, barring Kerala and Meghalaya, women do not have the right to property and hence cannot offer collateral for a loan, Bharatiya Mahila Bank is ready to give them loans of up to Rs.1 crore without security. Of course, the borrowers need to pay a little extra for the cover of the Credit Guarantee Trust for Micro and Small Enterprises. Despite this, business is not taking off simply because of a lack of awareness about this bank among women and its restricted reach.

In the beginning, its chairman wrote to 2,000-odd Indian institutions—ranging from corporations to academic bodies—seeking business relationships, but there has been hardly any response. Since there are not too many takers for loans customized for women, it is giving money to intermediaries such as LIC Housing Finance Ltd and GIC Housing Finance Ltd, Janalakshmi Financial Services Pvt. Ltd in Bengaluru and a microfinance outfit in Lucknow to buy cycle-rickshaws and sewing machines, among others.

Desperate to expand, the bank is monitoring business daily. Unable to bear the pressure to perform, some employees have already gone back to the institutions where from they came on deputation. This is an all-officer bank; there are no clerks on its payroll. Out of 250 executives, 100 have been on deputation from other banks. The incentive to join the bank was a one-grade promotion, but now frustrated employees are willing to go back, settling for a lower grade and salary.

Technology is in place and soon Internet banking will take off, but managing this small bank is not easy as employees have come from many banks, soaked in different cultures. For instance, its two general managers are from United Bank of India and Canara Bank, and six deputy general managers are from Punjab National Bank, Bank of Maharashtra, Vijaya Bank and an SBI associate bank.

If the early signs are any indication, Bharatiya Mahila Bank is set to become a political misadventure by the erstwhile UPA government. Nowhere in the world has a bank for women become successful. Pakistan was the first country to set up a women’s bank—First Women Bank Ltd—in 1989. Set up by the late prime minister Benazir Bhutto to meet the needs of women entrepreneurs, it began business in December 1989 with five leading public sector banks holding a 90% stake and the government the rest. Subsequently, the government’s stake has risen beyond 50%.

Tanzania Women’s Bank Ltd is the second example. In 1999, a group of women entrepreneurs proposed the idea of the bank to then president Benjamin William Mkapa. It was set up in 2007, with the government holding a 97% equity stake and private entities the rest, but it started business in July 2009. Based in Dar es Salaam, it focuses on low-income earners, small businesses and small and medium enterprises. Its name was changed to Tanzania Women’s Bank Public Ltd Co. in 2012 when the lender planned to raise money from the public and list its shares.

If indeed the UPA government was concerned about women not getting money from banks, the smartest way of sorting out this problem could have been to ask all Indian banks to dedicate 5% of their branch network to cater to women customers. These branches could have been managed exclusively by women employees. At one stroke, we would have got 6,000 branches across India to do the job. Setting up this bank is a sheer waste of Rs.1,000 crore, particularly when the government is not in the pink of health on the fiscal situation.