Between September 2019 and March 2020, through press releases and tweets, the RBI repeatedly stressed that the Indian financial system was safe and sound. It needed to do so as in the two years between February 2018, when the Nirav Modi scam hit state-owned Punjab National Bank, and March 2020, when private sector Yes Bank Ltd was placed under moratorium, every facet of India’s financial system was exposed to reveal its vulnerability. Infrastructure Leasing & Financial Services Ltd, a shadow bank, collapsed; Dewan Housing Finance Corp Ltd, a housing finance company, went under; and the multi-state Punjab and Maharashtra Cooperative Bank crumbled.

Within a month of moving into the Mint Road, Acharya, the RBI’s youngest deputy governor post-liberalisation, chose to speak “with a certain sense of urgency” on the need and ways to “decisively resolve Indian banks’ stressed assets”, at a banking technology conference. As a deputy governor, his mandate was monetary policy-making but his core focus was on the banking crisis.

Much later, in October 2018, delivering the AD Shroff Memorial Lecture, Acharya said the governments that don’t respect central bank independence “will sooner or later incur the wrath of financial markets, ignite economic fire, and come to rue the day they undermined an important regulatory institution”. Subhash Chandra Garg, then economic affairs secretary, retaliated, tweeting: “Rupee trading at less than 73 to a dollar, Brent crude below $73 a barrel, markets up by over 4 per cent during the week and bond yields below 7.8 per cent. Wrath of the markets?”

The language of his two speeches chronicles the evolution in the relationship between the RBI and the government during that period, leading to governor Urjit Patel’s resignation in December 2018.

The preface of the book takes off from the “wrath of the markets” speech and talks about how fiscal dominance has become the bane of the Indian banking system.

Assessing the performance of RBI during his tenure, Acharya claims to have achieved “moderate success” in fixing the health of the banking sector, restoring financial stability, and restraining weak banks from lending. These developments coincided with the government announcing significant capitalisation of public sector banks (PSBs) and the insolvency law putting the recovery of bad loans on the fast track. Even privatisation of a few state-owned banks was on the table. Or, so Acharya felt.

However, in the next “10 months” the trend was reversed and the RBI lost its governor at “the altar of financial stability”. Acharya does not get into micro details but blames fiscal dominance for all the ills in the Indian banking sector.

The government needs to borrow to bridge its fiscal deficit and it is the RBI’s job is to create ample liquidity in the system and keep the interest rate low to ensure the borrowing programme’s success.

He even talks about “implicit” pressure on the monetary policy committee to cut rates: “Rate cuts are preferred and inflation forecasting errors on the downside are okay (even welcome!), while rate hikes are particularly disliked along with inflation forecasting errors on the upside.” Once sufficiently fiscally dominated, the liquidity policy can control most of the government bond yield curve and prices, rendering the rate-setting process irrelevant.

Apart from successfully playing the role of the government’s debt manager, the RBI’s other priority, according to Acharya, is protecting the PSBs’ balance sheets. If they make profits, the government does not need to infuse capital. So, the banks are allowed to reap the benefit of treasury gains immediately but losses can be recognised over a period of time. “The central bank is often working the hardest to ensure that public sector banks can show profits and adequate capital to markets at quarter ends,” he writes. Not the bankers and their owners, the RBI manages the interest rate risks for these banks!

This practice is fairly well-known in India but the central bankers normally don’t talk on such issues. He also refers to the government’s demand for “interim dividend” from the RBI, bypassing other arrangements such as ways and means advances (which limit the extent of temporary monetisation of the government deficit by the central bank) and how it erodes the strength of the central bank’s balance sheet. Alongside, we get to know little secrets such as even some of India’s top-rated firms do not always make payments when due and many state-owned, listed enterprises that borrow in bond markets default regularly.

Without naming the bank, he says that ever-greening of poor loans by a part of India’s shadow banking lay at the doorstep of India’s banking, notably “one private bank”, and pitches hard for making the asset quality review a mandatory annual ritual for the entire financial sector, including the non-banking financial companies.

A few years ago, D Subbarao wrote a tell-all book, “Who Moved My Interest Rate?”. Y V Reddy followed it up with his autobiography, “Advice & Dissent: My Life in Public Service”. Then came Raghuram Rajan’s “I Do What I Do”. The title sounds combative but Rajan was not loud — he was circumspect and there was a coherent pattern through all his speeches — taking forward the reform agenda of the Indian banking and financial sector. Acharya, often referred to as the “poor man’s Rajan”, followed the Rajan genre.

Music is very close to his heart. Acharya loves Hindustani classical music and believes that lyrics give further meaning to music. His all-time favourite song is Kishore Kumar’s “Kuchh toh log kahenge/Logon ka kaam hai kehna/Chhodo bekaar ki baaton mein…” While writing the preface to this book, a compilation of his speeches delivered during the RBI days, Acharya seemed to be listening to this song but this won’t be music to the ears of many. 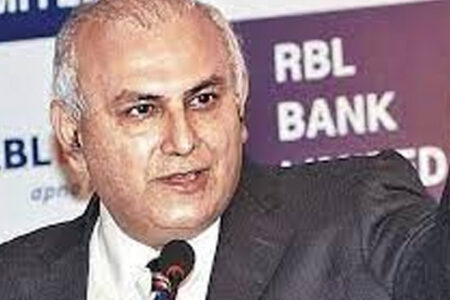